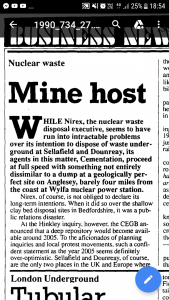 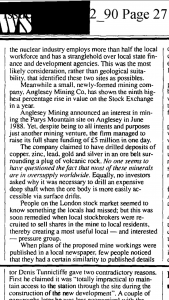 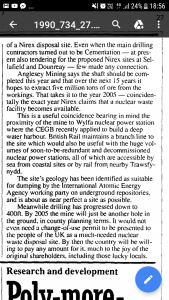 Want to know why the BBC won’t expose the industrial-scale money-laundering network that controls the political and financial sectors across Britain and other parts of the world?

Why the design of the Morris Shaft (named after now deceased Dr. Hugh Morris) at Parys Mountain in Amlwch is commensurate with the design of a NUCLEAR WASTE REPOSITORY, as raised in an article in Private Eye, shown here! 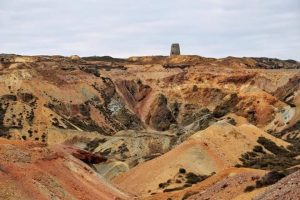 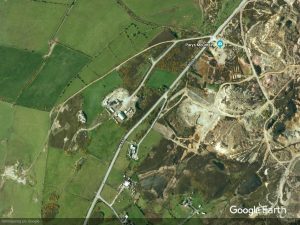 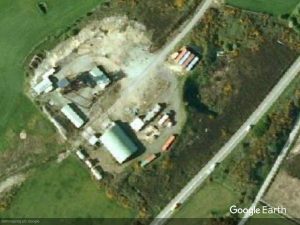 Here is an article that shows that the design of the Morris Shaft on Parys Mountain is just like that of a nuclear waste repository.

Given that what Pandora’s Box Investigations Limited has uncovered to be right so far with Anglesey Mining and its 34 years of no mining yet incurs higle losses that the taxpayer has to bail them out with isn’t it right that the people of Ynys Môn (Anglesey) are told if there is any hidden toxic nuclear waste down there and a proper, independent investigation be carried out? We believe that Anglesey Mining are defrauding not just shareholders but are hiding many secrets that need investigating into.

The Morris Shaft was sunk in 1990-91 by Cementation Mining who are agents of Nirex, who work for Sellafield (a NUCLEAR power station) around the same time that the Trawsfynydd NUCLEAR Power Station was decommissioned.  Parys Mountain in Amlwch is also only an hop, skip and a jump from the Wylfa NUCLEAR Power Station, too. Get the picture? There is more to this than mere coincidence. Is tha why they make false promises and say that they are going to mine, but never will? 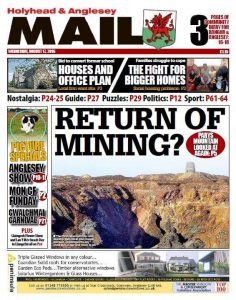 Why will Lord Tony Hall of Birkenhead (the Director General of the BBC), a liveryman at Painter’s Hall, 8-9 Little Trinity Lane, London not expose the money-laundering network linked to companies like Eurang and Anglesey Mining Plc that operate from that address? Could it be because the BBC is not the impartial institution that it purports to be and is connected to a vast money-laundering network which it doesn’t want people to be aware of? 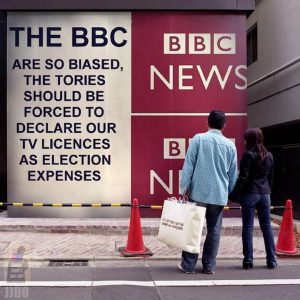 Why would Anglesey Mining Plc have the correspondence address for the company at a Masonic Lodge I ask you? Well, ask Gordon Bowden. He visited the BBC on 1st March 2015 and 2016 with others and Kelly Curtis said that he would help “help you guys to the ends of the Earth.” 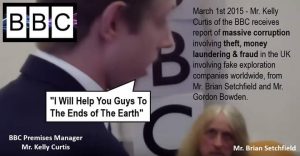 Did Lord Hall block any documentary into the Finchley Road exposé because he is a Freemason at the very Lodge that Gordon was trying to show as being behind a vast money-laundering network linked to Ex Prime Minister Tony Blair and his Windrush Ventures, and Home Secretary Amber Augusta Rudd and Monticello Plc? 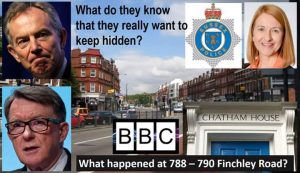 If you don’t believe me then check out Lord Hall’s bio here:

If it wasn’t true then he would have it taken down, wouldn’t he? Here is a link to Painter’s Hall:

Check out which companies and Directors are registered at 9 Little Trinity Lane, London. EC4V 2AD here:

Notice any familiar names from Anglesey Mining Plc, such as Danesh Kumar Varma (the Finance Director of the firm that hasn’t mined a thing in 34 years) and John Francis Kearney (the Chairman of said company)? Well, fancy that.

Here is the proof of Anglesey Mining Plc having their address at 9Little Trinity Lane, London. EC4V 2AD…it’s on their website:

Back to Companies House and here is Danesh Kumar Varmar again at Brooks Precious Metals Limited. (Remember the name because I will come back to this company in a minute):

And here is Mr. Varma again:

Well, if you delve into KCA Secretaries Limited here you see a lot more of him, including at Star Mining:

Who do we find here? Roger William Turner, another one linked to Anglesey Mining:

Let’s move to the next one, Cash on Mobile, and shock horror! It’s only Danesh Kumar Varma again:

How about Kennard Cousins and Associates Limited? Yep. He’s there again.

What about Eurang Limited? Of course, but so is Roger William Turner and Mark Michael Wellesley-wood. These Directors are also linked to Grangesburg Iron Ore in Sweden, the sister company of Anglesey Mining Plc, another company that has not mined anything since these guys have been at the helm:

Here’s more info about the Directors of Grangesburg Iron Ore:

Remember Brooks Precious Metals? Well, here is Rowan Maule, who happens to be a Director of Grangesburg as well:

Well, Brook Corporate Finance Limited also has Danesh Kumar Varma on there twice, once at the top, and again at the bottom:

And here is again at Brook Online:

As you can see, Mr. Varma is a bit of a player for the chaps at the Masonic Lodge. How about this Global Conservation firm (do me a favour!). Of course, he is here too:

And here, too, as Danesh Kumar UARMA with Geoffrey Alan Hoodless of Hoodless Brennan:

Not just that, though, we have Waterlow Secretaries…company formation and money-laundering agents. This is where it gets really meaty, don’t you think, especially if Labour are really serious about following up the Panama and Paradise Papers in exposing offshore tax evasion ?

It’s the same thing with Minco Mining Limited. We have the usual suspects here again, plus Swift Incorporations, another known money-laundering company:

How about Zacatecas Exploration Limited? Here’s another corker:

Here is Mr. Varma on his own this time at GPS Wealth. With the word “wealth” I would imagine a lot of people would like to get involved, just like in a Pyramid or a Ponzi Scheme:

As you can see, Mr. Danesh Kumar Varma has quite a busy portfolio of companies linked to to the Painter’s Hall Masonic Lodge, and a lot of companies that are registered there but with their correspondence address being at: Flat 41, Stevens House, Jerome Place, Kingston Upon Thames, Surrey, United Kingdom, KT1 1HX …just to make it less conspicuous I guess. But, Anglesey Mining Plc still has their correspondence address being at the Painter’s Hall Masonic Lodge.

We also have to question why Rona Fairhead and her links to HSBC (and its family ties with David Cameron) is also so high up within the BBC. But, that’s another matter altogether.

It also explains, of course, why the BBC have not exposed the evidence that Gordon Bowden gave them on 1st March 2015 and 2016 that could bring down the whole Establishment and could give back to the people of Britain what has been taken from them for so long.

So, when is this going to be exposed and raised as a question in Parliament? Isn’t it about time that the BBC own up about their Director General having such close links to a money-laundering network?

To All main recipients and cc witness recipients.

I will, as my “Duty of Care” in this OPEN LETTER COMMUNICATION, ensure the FCA, SFO and USA DEPARTMENT OF JUSTICE investigate the direct Historic, recorded Inter relationships, between GEOFFREY ALAN HOODLESS, his network of his BEAUFORT SECURITY LIMITED and Subsidiary Spin Off Broker Companies Directors and his, I aver, network of Cohort Conspiring FREEMASONS Directors in Fraud, Theft, Money Laundering, Insider Dealing.

I stand by these criminal accusations and am prepared to provide such supporting Data document evidence, under Oath, directly in the Public Interest, to any SFO, Police, FCA or Government Investigation.

I await any reply from the main recipients as witnessed by the list of cc recipients.

MOSSACK FONSECA closes down ???? What, Just like the current scandal of BEAUFORT SECURITIES and its spin offs aka HOODLESS BRENNAN, (see ANGLESEY MINING PLC the 34 year MAIN LSE Stock Exchange PONZI SCAM) MOSSACK FONSECA’s HQ in NOT in PANAMA its about it’s COVERT “Cloak & Dagger” PARENT Money Laundering Company RAYMOND MORRIS GROUP fronted by its maze of interlocked subsidiaries like RM COMPANY SERVICES LIMITED, RM REGISTRARS LIMITED, RM NOMINEES LIMITED, etc etc etc. You need to UNDERSTAND THE BIG PICTURE. Try looking at the KING PIN PLAYERS, Executives EMMANUEL ISAAC HAYEEM COHEN, JULIA BERNADETTE COE, Check their Company Affiliations or, CHECK EVERY Company out of their massive Money Laundering Conduit Boiler Room, NO, as I’ve said since 2006, IT’S NOT IN PANAMA, it’s here in the UK, it’s INVISION HOUSE, WILBURY WAY, HITCHIN, HERTS. SG4 0TW and the 751 Companies using that Post Code. I dismantled them ALL way back in 2006 when I found the direct Association to 788-790 FINCHLEY RD LONDON NW11, to RAYMOND MORRIS, MOSSACK FONSECA is one in the same controlled network of ADMIN, COMPANY FORMATIONS AGENTS just like @UKPLC out of 5 JUPITER HOUSE CALLEVA PARK ALDERMASTON READING, or, FORM 10 DIRECTORS FD LTD, FORM 10 SECRETARIES FD LTD out of 39a LEICESTER RD MANCHESTER, or, HCS SECRETARIES, BLACKFRIARS SECRETARIES, out of 44 UPPER BELGRAVE ROAD CLIFTON BRISTOL, or INSTANT COMPANIES and SWIFT INCORPORATIONS LIMITED out of 1 MITCHELL LANE BRISTOL, HANOVER SECRETARIES, CLYDE SECRETARIES out of PRINCES HOUSE 138 HOUNDSDITCH, BROADWAY SECRETARIES out of 50 BROADWAY LONDON, WOODBERRY DIRECTORS out of WINNINGTON HOUSE and ASCOT HOUSE 2 WOODBERRY GROVE NORTH FINCHLEY, ELSCOT HOUSE ACADIA AVENUE, COMPANY DIRECTORS LIMITED, TEMPLE SECRETARIES LIMITED out of the now ABANDONED Boiler Room 788-790 FINCHLEY RD, ST JAMES’S PLACE SECRETARIES out of 6 ST JAMES’S PLACE ST JAMES’S SQUARE LONDON , these and their spin off Admin Subsidiaries and many others in my Library of Records are ALL Interconnected, they are the International Organised Crime Asset Stripping facilitator Boiler Rooms ASSET STRIPPING their United Kingdom and International registered Companies linked DIRECTLY to THOUSANDS of Stock Exchange FAKE OIL, GAS & MINING “EXPLORATION” Director Only £Billion Cash Gutted Debt Facilitated PONZI SCAMS, fronted by inducted CORRUPT MP’s, LORDS, BARONESSES, SIR’s, BANKERS and Corporate VIP’s to give these FRAUD Companies a semblance of trust and respectability for being genuine Investment Companies that I have systematically dismantled over 16 years and ALL lead back to one area of the CITY OF LONDON, from ALL Addresses in ST JAMES’S SQUARE LONDON, OWNED & CONTROLLED by THE ROTHSCHILDS, that’s not CONSPIRACY, that’s Forensic Documented FACT, I mean, HOW HIGH UP in the Corridors of Power does this ALL Go, START HERE with these FEW EXAMPLES, LORD PADDY ASHDOWN, LORD PETER HAIN, LORD IAN COLIN ORR – EWING, BARONESS VALERIE AMOS, SIR WILLIAM “BILL” BENJAMIN BOWRING GAMMELL, MICHAEL HOWARD, Ex PM’s MARGARET THATCHER, GORDON BROWN, TONY BLAIR, or THERESA MAY’s appointed HOME SECRETARY AMBER AUGUSTA RUDD, the ASSET STRIPPING and Corporate Fraud Political Corruption Document Evidence is ALL THERE, you just “FOLLOW THE MONEY”.

With regards to the UNITED STATES DEPARTMENT OF JUSTICE and UK. FCA actions against BEAUFORT SECURITIES, its spin offs and charged Executives.

“As long term loyal shareholders, we deserve an urgent update from our B.O. D. Does anyone have a line of communication with Bill”.

An OPEN LETTER Correspondence to ALL Main Recipients including THE SERIOUS FRAUD OFFICE and Witness cc Recipients.

I will, as my “Duty of Care” to ensure ALL Police and FCA Authorities are required under their “Duty of Care”, given the recent developments of the USA Department of Justice Criminal charges and FCA Closure and freezing assets of BEAUFORT SECURITIES, its Spin off Subsidiaries and named indicted Officers, to investigate the inter relationships of ALL COMMON DIRECTORS fronting, I aver, interconnected International Organised Crime, £Billion Money Laundering, Penny Stock Share Price Manipulation, Criminal Director Optional Share INSIDER TRADING Rings Including PAST & CURRENT Directors and their COMPLICIT “Brokers” Lawyers, Accountants, Auditors and JORC Reserve Report Geologists ALL affiliated to ANGLESEY MINING PLC, its interlocked Subsidiaries PARENT COMPANY, % Acquisitions Companies aligned to their network MASONIC LODGE at PAINTERS & STAINERS LODGE aka PAINTERS HALL, 8 & 9 LITTLE TRINITY LANE LONDON and DIRECTLY INTERCONNECTED to 788-790 FINCHLEY ROAD LONDON NW11.

All: GO TO AND OPEN: Here on Page 4 JANICE MARGARET BROWN. Booooooooom This is where I went in 2007 surrounding SIR WILLIAM “BILL” BENJAMIN BOWRING GAMMEL, you know CAIRN ENERGY PLC, CAIRN INDIA, and VEDANTA RESOURCES regarding the £6 billion ASSET STRIPPING FRAUD, assisted by then PRIME MINISTER DAVID CAMERON.  Gordon.
http://companycheck.co.uk/company/SC036219/JOHN-WOOD-GROUP-PLC 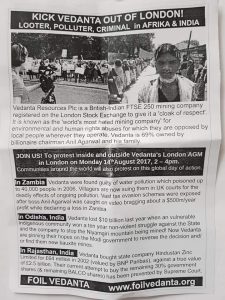 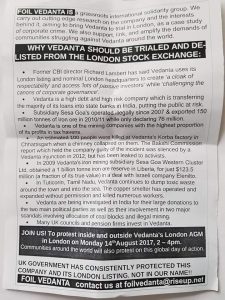 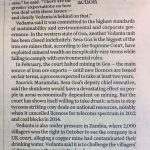 And as for missing nuclear weapons linked to David Cameron and the same money-laundering network mentioned here in then listen to this and ask yourself why isn’t there a public inquiry being asked into it!